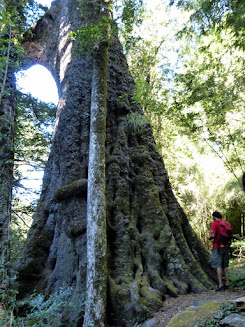 Forest lost is the most relevant driver of global change, thus stoping forest degradation is a key challengue towards sustainable development. Chile is among the countries with the highest rate of primary forest degradation in latinamerica. This project aims at developing tools to monitor forest degradation using remote sensing techniques and to evaluate recent spatio-temporal trends in biomass of primary temperate rainforests in south-central Chile.

It is widely recognized the role of insects outbreaks on forest dynamics. It has been claimed that insect outbreaks are rare phenomena in the Southern Hemisphere. However, recent massive insect outbreaks of the native moth Ormiscodes amphimone have caused total defoliation of temperate forests for several non-consecutive years in Chilean Patagonia. This project aim to fill relevant scientific gaps about the long-term temporal and spatial dynamic of O. amphimone outbreaks in southern temperate forests by using the framework of population dynamics theory, dendrochronological methods and remote sensing techniques.

The loss of large old trees is a recognized concern in forest ecosystems. In southern South America (SSA) existed trees as big as 5 m in diameter and >50 m tall. Other tree species in the same region can reach over 40 m tall and up to 2 m in diameter. However, limited information exists on carbon release that accompanies the logging or dead of these large old trees. In addition, large old trees in SSA may experience higher mortality risk due increased drought conditions predicted for this century producing a decrease in above-ground biomass and releasing carbon. The main goal of this research is to assess the consequences that climate change could exert on large old trees and their relevance for carbon storage of primary temperate rainforests of Chile.

Plant traits, both morphological and functional, are essential to understanding and predicting the adaptation of ecosystems to global change. This project developed a database that improves the empirical basis for such predictions. It is expected in the short-term to provide public access (via a website) for scientific and educational use.

In addition a parameter set was developed that contributes towards informing dynamic forest models in data-poor areas such as SSA. Finally, this research evaluated the performance of three dynamic forest models in SSA. In addition, calibration schemes were elaborated to reduce parameter uncertainty. The experience gained contributes towards applying the models over large extents of primary forests in SSA. This research contributed to determine climate change threats on ecosystem services of primary forests in SSA and produced a high quality baseline data for future research.

My work focuses on the dynamics and conservation of forests, with focus on documenting and anticipating the impacts of global change. I use a combination of approaches to explore how local interactions of trees with their environment, scale up to patterns of forest structure and distribution of tree species. My fieldwork has focused in temperate rainforests of southern South America.